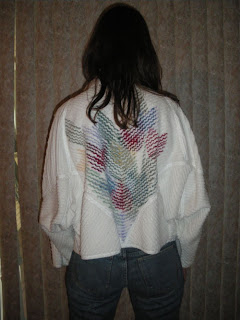 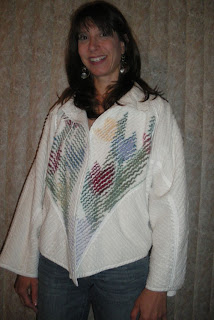 I made the white chenille jacket either 11 or 12 years ago and it remains one of my favorite things I’ve ever sewn. I still love lots of things I sew, but this jacket is just an ongoing favorite even more than 10 years later. I had to get rid of a lot of things I made 10+ years ago because I’m happy to say that I lost a lot of weight and they don’t fit anymore – in a good way! I’ve kept the weight off for about 6 years now. But this jacket is loose fitting and can be worn still. I used four layers (if I remember correctly) of white inexpensive muslin and sewed bias lines every 1/2 inch or so. I chevroned some areas as well. Before sewing I layered colored cotton cutouts for the flowers, stems and leaves on the front and back, stitching through them with the muslin. I then cut through every layer between the stitching lines except the bottom-most layer, leaving that as the anchor base. All seams and edges are covered with bias tape for a finished look. I then washed and dried the jacket and it fluffed up to create the pretty texture and watercolor look of the flowers. I added an unusual button a friend bought me on a trip she took and some twisted rattail cording for the closure. It is warm without being too heavy and gets comments most of the time I wear it. I have since made many other chenilled items, but I just love this jacket the most. I recently (last week) made a new chenille jacket, this time from rayon, and used 3 layers, cutting through two of them. It is drapier and lighter weight. I also left the seams exposed and trimmed them so they fluffed and blend in nicely with the rest of the jacket. The edges of the new jacket are sewn with contrasting bias strips – one on the wrong side and two on the top side, rather than finished with folded bias tape. This way the edges have the fluff as well. It was much easier! I will continue to make bias chenille items but will probably not do so much channel stitching and cutting as in the past, but rather play with the bias strips of fabric instead. It’s just faster and easier and has more room for flexiblity and creativity.