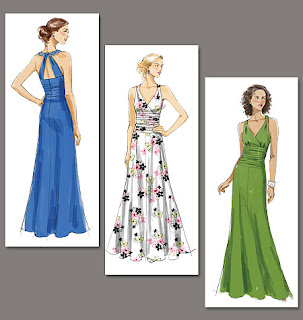 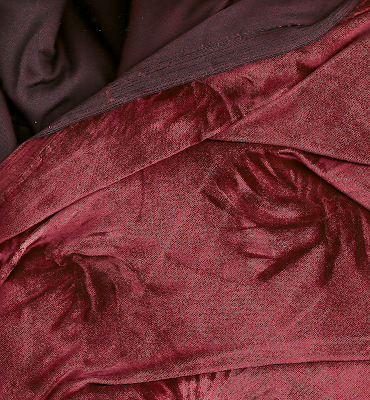 OK – I get to sew a regular pattern again! Yea – I think?! My hubby and I do ballroom dancing (NOT DWTS type – but social) at a neighborhood dance hall and NYE is always fun and dress up. What fun!
I found this luscious embossed velvet/lycra knit while in Atlanta at the American Sewing Guild Conference back in August.
The embossing is in rows – and I made necessary decisions this afternoon – and even got to crawl around on the floor to cut it out!
I strongly considered what pattern to use. Gee – it is sure nice to be able to cruise the patterns availalable from my ez chair online! I had purchased a Burda pattern, but then saw it made up and photo’d online, and decided the twisty thing on the bodice was too bulky – and out of this napped fabric, it would be VERY much too bulky.
This pattern presented some challenging decisions as well.
1. It has nap – so which way to cut it??? Even though I knew it would look ‘richer’ with nap running up (as I run hand down my skirt – it would be rough – I really liked the softer red color of cutting it with nap running down.
2. At first I thought I would do the center view – C – where the skirt is fuller – becuse the other skirts are cut on the bias – but I ultimately decided to actually use the somewhat slimmer skirt and yes – to cut it on the bias! The fabric being a knit – it is very heavy – and i was just afraid that much skirt would be really TOO much trying to dance. Holding it up – I think it will look just fine – and even though the embossings are in ‘rows’ – I think I will be the only one who would ever notice this.
3. The midriff shirring – was also is designed to be cut on the bias – and I understand that – but I have had experience with that concept on other gowns – and it never seems to work right – I always have to pull it much tighter to get it to look right – and with this being a knit – I just didn’t think it would work. So – I decided to cut it so that the least amount of stretch – lengthwise grain – would be going around. This area is exeuted on a base of lining. So – that is what I decided – will continue to post as I stitch and fit and you’ll find out how it all goes.
Typical – I lost one pattern piece – and DH found it in the garbage with other tissue scraps.
AND – I was thinking so hard about getting the skirt out of the fabric – matching, etc., that I realized AFTER I cut it that I cut the FRONT piece 4 times – instead of 2 and the BACK 2 times. However, comparing the front and back pieces, I found VERY little difference, so I think I’ll be OK actually.
I do have enough fabric left over to recut the back skirt if need be – but I’m excited that I have enough left to make either a neat jacket, or a great top – so I’m hoping that the skirt will work out.
Sewing it should be fun….stay tuned! OH – and that Roll the Gold Titanium Rotary cutting blade once again worked like a charm to cut what I could that lay on my 4s x 80 cutting mat on the floor. For the rest of it – I was testing my new KAI Modified Serrated blad scissors – 5220~ WOW~ !!!!! Watch too for more info on that new product!Next Progress Installment…

Well – right off the bat, as I lined the bodice, it was obvious AGAIN how lousy directions are – even Vogue! Unless you would trim the armhole seam allowance VERY close – it would not, could not turn nicely without CLIPPING into the seam allowance at the curve – several times!!! The reason is that this edge – the cut edge, as it is inside out – is the INSIDE of a circle – smaller than what it will become when it turns right side out – that same edge will become the OUTSIDE of a circle – larger, and the only way it can do that – to make that edge larger, is to clip it so that it can spread – to get larger.

By the way – this bodice was well designed – cut on the bias, so that the angled front edge is on the straight grain. When cutting the lining, I utilized the non-stretchable SELVAGE for that edge – thus stabilizing it very well.

I really like this bodice – and the back strap that loops through the neck back facing that attaches to the front bodice straps. I may well use it on a sundress next summer. I think it is really pretty flattering – and could certainly be cut higher at the center front so as not to show cleavage.

ANYWAY…typical, the method of joining the narrow front bodice straps to the neck facing in the back is BAD – and, as I see it – darned near impossible. However, I see it done this way over and over and over.

Doing it this way allows you to easily stitch the 2 ‘outside’ surfaces (in this case, the back neck piece to the front strap extension). After doing that, you should trim down this seam allowance, and then either press it open, or towards one way or the other – grading it first to ‘graduate the bulk’ and THEN turn under the seam edges of the ends of the Lining, and then slip slipstitch the lining ends together, and also slipstitch along the remaining unstitched edges along both sides.

This worked really well for me, and I pressed the graded seam towards the bodice because there is a tuck there anyway releasing fullness.

I then worked VERY hard and got the midriff all shirred beautifully. Cutting it on the straight grain – going around the waist worked well to make it NOT stretch. HOWEVER, I’m long-waisted, and had adjusted the midriff pieces adding 1.5″ before cutting. THAT plus some extra ‘flesh’ that has crept on made for a ‘creative challenge’ as when I tried it on – I lacked about 4+ inches as the bottom most edge of the midriff edges meeting!

Oh well…that much bulk going horizontally around my midriff wasn’t that flattering anyway – even if it did fit. Sew… onto some ‘design adjustments’…..

It was clear that all I had to do was hike up the top of the skirt edge, making the midriff area 3″ deep instead of like 12″ deep – and I liked the look of it. That also made it fit around very nicely. I also played and decided that some vertical seaming or stitching through the expanse of the front shirring would be nice – dividing that midriff area in the front into 3 sections. I did that by hand-basting through the depth of the midriff to then pull it up and then machine stitched through the outer velour and base lining. Here’s what it looks like now…

And the back – the invisible zipper took some work, but finally got it in nicely. It is an orangey red that doesn’t match at all – so I’m going to the drug store with a sample in hand to match some nail polish to paint the zipper pull tab.

A hook and thread eye at the very top holds it together nicely, It is amazing to me how very far from the zip that the hook needs to be stitched. I find to do the thread ‘eye’ first works best. Then you ‘hook’ the hook part in and pull it over so that the edges come together as you desire in order to determine exactly where to stitch on that hook. AND – you MUST stitch a few times entirely through to the outer side so that the hook doesn’t pull on the lining edge inside only.

Speaking of that lining edge inside – see on the picture to the right that I decided to ‘engineer’ a rectangle of lining, edges folded in – along the zipper edge on the inside of the upper bodice at the back. I think this worked out better because the lining of the upper bodice really couldn’t finish off the zipper here, as the directions had you basting the lower edges together first – before stitching the shirred midriff section to it.

You can also see in this photo that the inside of the midriff section has not been completed. I feel that the horizontal seam allowances need to be hand catch-stitched to the midriff base layer to hold them in place first. THEN the midriff lining can be hand-stitched into place. I’m actually inspired to say NO to all holiday cookies and to really hit my ‘Abdoer’ exercise machine even more, so I’m gonna leave this open for now and hope to have to take it in at the side seams. THEN I’ll finish it off inside.

also had seriously thought about adding godets in the skirt seams anyway, so I went ahead and did that – un-stitching each seam for the lower 20″ or so and adding godets I drafted. The center of each ‘cone’ shape is the length needed – on straight grain – like the radius of a circle, and the bottom then is the outer edge of a circle. I decided that I wanted the bottom edge of the godet – that circumference edge – to meausure 20″. That was easy to draft – then added seam allowances, and stitched into each of the seams – center front, back, and each side seam. Doing this added a nice 4 times 20 = 80″ to the ‘dancin’ hem!

AND – you may not believe this, but since this is a knit, and knits don’t ravel, I’ve decided the ‘in’ and EZ and smart thing to do is to leave the hem as a cut edge! I’ll make you a bet that not a single person will come up to me NYE to tell me I forgot to ‘hem’ my dress!

So – done I think, until a day or so before – when I do final fitting of the midriff and finish off the inside with the midriff lining.

ONLY decision left is to decide on jewelry. I have nice rhinestone earrings an necklace…or gold an ruby-type stones.